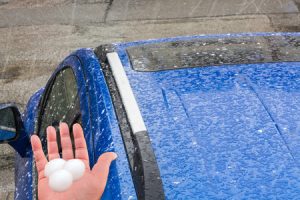 There are more than 6,000 major hail storms that take place all across the country every year. As a result, there’s a good chance that you’ve been involved in at least one of them throughout the course of your life. But even if hail storms are regular events in your city or town, there is a lot that you probably don’t know about them.

Here are a few shocking facts about hail that will make you look at hail storms in a whole new way:

Hailstones begin to take their shape inside of thunderstorms. They start off as small droplets of water that have been supercooled before freezing when they come into contact with dirt or dust that’s also located inside of the storm. But initially, hailstones are too light to make their way down to the ground, so they just bounce around inside of the storm. It’s not until they collect more water and grow to be larger in size that they finally plummet down towards the earth.

Most of the hailstones that make their way down towards the ground don’t come anywhere close to hitting 100 miles per hour. But there are “severe” hailstones that can top one inch in diameter and pick up a ton of speed as they travel towards the earth. Some of these hailstones can move as quickly as almost 100 miles per hour, which obviously makes them very dangerous to the people, places, and things they might encounter.

Hail causes more than $1 billion in damage every single year

There are more than 700 hail storms in Texas every year. If your vehicle is ever damaged during one, Dent Sharks can help. We specialize in providing our customers with dent and hail damage repair for just about all vehicle makes and models. Call us at 832-916-5393 today to learn about our paintless dent repair services.