Car dents happen so frequently, and many people get frustrated when the dent is worse than they thought. There are many ways to prevent dents, but some come suddenly, and there are no ways around them. Paintless dent repair is a different way to fix those unwanted dings and dents on your car. 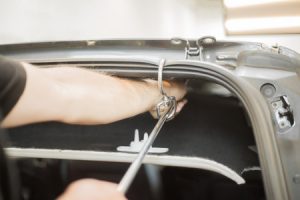 It is a unique process that does not require paint to fix the dent on your car. No buffers or other compounds are required either in this particular process. The technique targets pressure points around the dent where the metal panel will return to the normal shape. The original factory color is untouched by paint and coverings.

The process consists of slowly working out the dents and dings, similar to metalworking process used to form sheet metal before production. It takes a good amount of expertise and skill to work out the dents with this technique. That is why Dent Sharks is the right choice when it comes to this process.

What are the Advantages?

The value of your car won’t change when it’s time to sell if you have a car dent that was fixed from paintless dent repair. It will cost considerably less than traditional body work because the process is all-in-one. There are no other additives involved. It is also very convenient because the process takes significantly less time than any other body work.

Contact Dent Sharks at 1-832-916-5393 today if you have acquired a dent and would like to learn more about our dent repair techniques. We can help you get back to enjoying your summer!